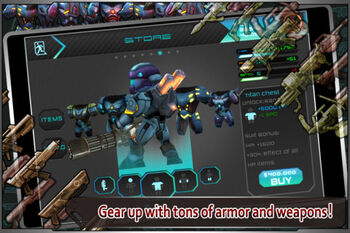 This article displays the complete list of weapons that can be purchased at the Star Warfare equipment store. All weapons are split into in-game categories with a brief overview of the weapon class, while the link to each class provides a more detailed description.

Want pictures? Check out the Gallery

Swords are melee weapons that do not consume ammo and are best suited for very close-range combat in both PvP and PvE.

Fast firing, but generally low-powered weapons that are useful when starting the game. They are quick on the trigger and considered first-class weapons because they are unlocked at the first level of Star Warfare. They can be replaced by Laser Guns in later levels, but still, hold their own in terms of DPS. Although they are easy to use when moving, they do not have a lot of power, neither in PvP nor in PvE.

(Note: These weapons are commonly glitched as their fire-rate graphics increase to 0.17)

High powered, close-quarter combat and low rate of fire weapons with great stopping power. They fire projectiles that affect targets at short range; due to this limiting factor, shotguns are not suitable for PvP due to their ineffective range and low DPS. Other, more specialized weapons are utilized for close-range combat in PvP.

(Note: Damage is reduced the further away you are from your target)

These are AOE (Area Of Effect) weapons with high power but a low fire-rate. They also have a very high splash damage radius which kills deals large amounts of damage to enemies within the zone.

Weapons that fire grenades that explode after a certain time, or when stepped by an enemy player. This makes it useful in narrow places in both PvP and PvE, but a low splash damage and inaccurate aim prove that it's generally ineffective.

These weapons are generally considered as a direct upgrade from Assault Rifles, but displaying more in power along with a unique penetration ability. The beams fired by Laser Guns are not stopped when they hit the target; instead, they travel on and pass through the target instead. This makes Laser Guns effective at clearing out hordes of aliens all lined up for the trigger-happy player.

Weapons with high fire-rates and a pollution ability deal AOE damage. In PvE, they are perfect for aliens that clump together in waves; in PvP, they are useful for damaging enemies hiding behind barriers or walls (yes, they can go through even enemies that found a glitch to stay inside the wall!)

Medium-powered weapons that are highly specified for close combat. They have much higher fire rates than RPGs but have slow-moving projectiles which make it hard to hit opponents at a distance. Note that the projectiles are slightly explosive and deal AOE damage.

Also called as Miniguns or Gatling guns, these guns have a high firerate with huge damage, but comes with a speed reduction and chews your energy rapidly, and has a 1-second warm-up before shooting.

(The M-27B1 and M-Z7B2 Machine Gun sometimes appear to have no sounds/noises, but it will fix in some time)

(Note: Sniper Rifles are also included to the Atom set bonus "+30% power to All beam weapons")

Interesting weapons that fire bouncing, ricocheting energy disks that cut through anything in its path. They explode and deal AOE damage if the impact with an object is more than 45º.

A weapon that fires heat-seeking nails that home on the target, making it a very easy-to-aim gun. It is deadly for players who lack agility and cannot avoid the projectiles, though faster players may be able to dodge many of them.

It is a unique, (ironically) flamethrower-like weapon that sprays short-ranged projectiles, supposedly snow, that slow down their target.

A peculiar weapon that shoots high-explosive energy balls. They are great for taking down large alien hordes in PvE and are relatively effective in PvP as they deal fair amounts of AOE damage. This makes it one of the most strongest melee PvE weapons along with its good fire rate.

"'It's the hand of God." -In game description for the Energy Glove.

(Note: Spring doesn't fire heat-seeking nails unless used with the Black Hole armor set ability active. By itself, it shoots 5 explosive nails that spread out like Trinity.)

Laser Cannon is a weapon very similar to the X-max Tree but fires a straight beam. However, the Laser Cannon has a cool down time. It also has a warm up time, like the Machine Guns. This weapon can penetrate enemies.