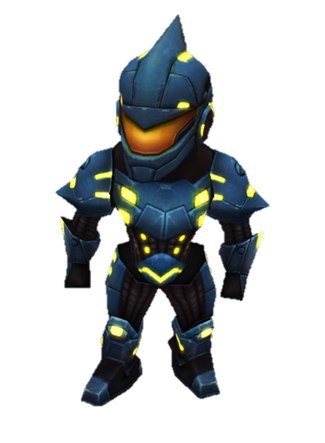 The Thunder Armor is a mid-game armor set that places emphasis on speed and power rather than defenses.

The Thunder Armor is one of six armor sets that possesses a reusable ability as a set bonus, the others being the Andromedae, Chaos, Black Hole, X-Field, and Wrath.

Due to the combined effect of the Thunder Hands (+20% power) and the armor's ability (+50% power, +2 speed), the Thunder Armor can momentarily achieve the highest power output from any single armor set. However, the Atom, Knight and R.O.M.E armors can provide consistently high damage output, with the latter two also possessing much better defenses.

It is possible to defeat all six bosses using this armor set. Similarly, its ability can eliminate opponents quickly in PvP or PvE, making it well-versed in both modes if used properly -- this generally only works with sufficiently powerful weapons given the armor's inability to survive sustained fire due to its comparatively low health. Offensive/high-speed backpacks such as the Jin.Jingle can be used to minimize damage taken by killing opponents before they can counterattack. Although this is the first armor in the game that can withstand a single hit from a fully-upgraded Sniper Rifle from most other opponents, a single follow-up shot is all that is needed to quickly put an end to a Thunder user.

The Thunder Armor's classification as a "mid-tier armor" is primarily based on the facts that it is unlocked in the middle of the game and that players will commonly replace it with one of the later armors with more HP.

Similarly to the Atom Armor, however, the Thunder Armor possesses much higher damage output potential than many of the other armors unlocked from Ranks 7-9, and effective use of its power results in aliens and bosses dying much faster than otherwise. However, if the fight drags on, higher-tier armors will gradually outstrip the Thunder for damage efficiency. Nevertheless, there is significant strategic potential in the speed and power boost from its ability, and it is capable of surviving a sniper round from most opponents if at full HP.

*Note 1: The Thunder Hands are currently the strongest Hand armor available in the game.

**Note 2: While the in-game description says that the Thunder ability takes 30 seconds to cool down, it actually takes 20 seconds from the time the ability ends until you can next invoke the ability again.

***Note 3: Because of the way Damage Modifiers are programmed, when the Thunder ability is used continuously, the effective power bonus from using the Thunder Armor is averaged at 40% from the armor alone. To factor in a bag, multiply the bag's power bonus by 1.5 and add it to the effective 40%.

Retrieved from "https://starwarfare.fandom.com/wiki/Thunder_Armor?oldid=135218"
Community content is available under CC-BY-SA unless otherwise noted.