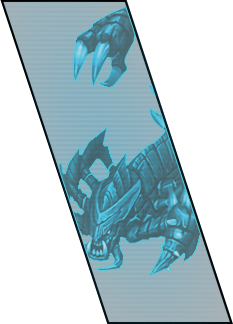 The Tacorlion is the second alien introduced to the game, nearly simultaneously with the Digger. Tacorlions move slowly, have low HP, but can attack long ranges. They do more damage than a Digger. Tacorlions will attack by launching an arcing spike projectile from their tail.

Battling Tacorlions is generally easy. Tacorlions delay a short while between when they aim and shoot their projectiles. Thus, sidestrafing targets are impossible for Tacorlions facing the player's front to hit. Tacorlions have a maximum range for their attacks. If the player stays out of this range, they cannot attack. In this case, the Tacorlion will slowly move closer to the player until it is in firing range. Tacorlions have no melee attack, meaning that if you can get close enough to one they will be nearly defenseless.

The elite version of a Tacorlion is colored purple and yellow (cyan in SW2) and is larger in size. Elite or mutated Tacorlions possess increased attack and health, but spawn uncommonly.