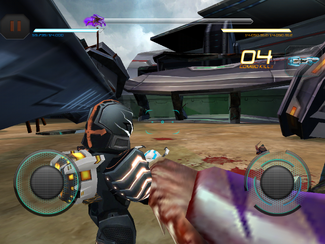 Previous map: Fire in the Hole

This sector is a public stadium, though its backstory can only be speculated upon. Many steel structures appear tattered, collapsed, bloodied, and rusted, suggesting that many battles have been fought there; however, most of these structures are not accessible to players. There appear to be two stadiums: one for the main map, and one for the Serpent boss fight. In the boss arena, there appear to be hovering objects were supposedly the announcers might have stood while a battle was going on. This is the only map where enemies will spawn above the player, and drop down.

The aliens you will face in this level are the second strongest in PvE (exceeded only by those in Crazy Carnival), with some attacks dealing more than 10,000 damage. Even the average Digger bite will dish out several thousand HP worth of damage. Furthermore, there are almost no camping spots and spawn patterns alter according to your position so it is recommended that you don't stop moving. Dodging is a MUST in this level. It is impossible to survive unless you avoid the incoming attacks from enemies.