Sniper Rifles are high-powered marksman weapons that can kill you with a single shot if you have low-tiered armor. However, if you have equipped good quality armor, you will be able to sustain a few more shots. This weapon is also very effective against aliens, killing most of them in one-hit, even in high level PvE matches. If used with the Atom Armor set (+30% bonus to lasers and snipers), they will rip apart high tier armor in just a shot or two and so are very good weapons to camp with.

Sniper Rifles generally shouldn't be used as your primary weapon for bosses and aliens (unless you find a good camping spot.) While they register very high DPS figures, their low firerates will prolong boss fights, given that you are unlikely to maximise their theoretical damage outputs, since missing even one shot causes the average damage output to drop drastically.

In PvP, Sniper Rifles should be used as your long-ranged weapon, in which, killing people in a unnoticeable, quiet place (e.g killing a person in the tower in Microwave), or providing marksman support from behind the front line. You can even use those when your opponent seems to be overpowering a teammate, assisting your comrades to survive in silent way. But remember, avoid utilizing sniper rifles as primary weapon, (such as the commonly used machine guns,) unless you have fast reflexes and are highly accurate. If you so choose to, be to sure maintain a healthy distance from your opponent, and keep moving or you will take heavy damage while waiting for your railgun to fire. Sniper Rifles can also be used as a cold-bullet weapon in which is used for quick eliminations of unsuspecting enemies behind their backs. They are commonly used to quickdraw into Machine Guns after being fired for quick assassinations.

When you try using a sniper rifle as a secondary weapon, you should ensure that you have enough time to change the currently equipped weapon into a close-range weapon when you run into heads. If not, you should avoid scoping before you shoot; instead, you can use the small targeter to shoot when running in circles. Using a sniper rifle is risky if someone a J.O.K.E/Trinity user happens to get in range of you, to try and retaliate it is recommended that you can switch to a melee weapon immediately once you get attacked.

The Black Hole armor grants 15% additional POW to sniper rifles (however this is proved to not exist).

"Eliminate enemies in long distance. One shot one kill."

The R100-Railgun is the only sniper rifle in the game purchasable with gold. When fully upgraded it has 3500 damage. The R100 can be bought for $2,000,000 and unlocked at Rank 6, so it's useful for a starter's sniper rifle. Its cumbersome speed is a negative factor when going against players with R700 AA's or Reflections, but it is effective and worth it.

"Has stun system. Hit and slow down your enemy."

The description is self-explanatory. When it hits a player, it slows them down by -2 speed. The stun system is useful to take out targets easier, and with 4900 damage at rank 8, it is the most powerful weapon in the game. The R700-AA is great for taking out agility-type armors like Cygni, R.O.M.E. and X-Field. It can be purchased for 190 Mithril. According to the in-game files, the "AA" stands for "Anti Armor".

"New elite prototype. Blast jump beam, hit one and turn to chase another. No one can escape from your sight."

This sniper rifle has a special "jump beam" ability. When you hit one target with it, a second beam will appear and direct to another enemy, allowing two kills (Note that the second beam is estimated to account for 50% of the first beam's damage) in one shot. Added in version 2.80, the sniper rifle used to have an "auto-aiming" bug which received criticism, but was patched in 2.81. This is also the only sniper rifle without a speed penalty. 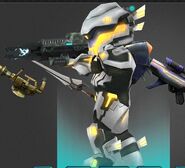 R100-Railgun in the Customize section. 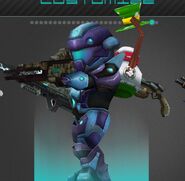 R700-AA in the Customize section.

Reflection in tandem with the Black Hole armor design.

R100-Railguns in use in Double Rages (Fire in the Hole).
Add a photo to this gallery

Retrieved from "https://starwarfare.fandom.com/wiki/Sniper_Rifles/Star_Warfare?oldid=135176"
Community content is available under CC-BY-SA unless otherwise noted.