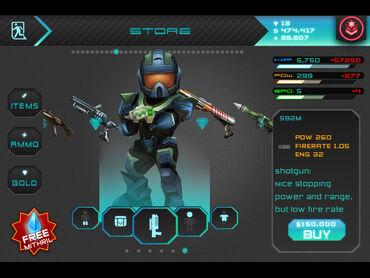 Shotguns are light-weight, close range specialists. They have low fire rates but reasonably high damage and bullet spread. Instead, their main problem is range: shotguns cannot damage anything more than a few feet away. Players with higher speed could potentially outrun you and take out your HP with long range weapons like a laser gun. Against Aliens, shotguns are excellent at close range but still are, in PvP, difficult to use due to their limited range. The Morpheus and Spreader, however, are capable of killing enemies from across Lair. Nonetheless, this weapon class is relatively effective in the map Front Line and also as a beginner weapon, since they are energy-conservative compared to other weapons.

In Star Warfare 2: Payback, the shotgun mechanics have been subjected to a major change. As opposed to the range-to-damage mechanic used by shotguns in Alien Invasion, a pellet and shot spread system has been implemented. This means that damage is no longer reduced the further away your target is -- damage dealt will be based on the amount of pellets that land on your target. This feature has seen a huge increase in shotgun users in both PvP and PvE.

The main skill required for PvP shotgun usage is aiming; If one can aim accurately and consistently, shotguns (namely the Morpheus or Spreader) can potentially be the most powerful close-range option. However, due to the Trinity and J.O.K.E being easier to use, shotguns are a rare sight in PvP.

It is not recommended that you use these weapons for boss fights, as their short range requires you to get unpleasantly close to the boss. This will leave you vulnerable and unprepared for any incoming attacks.

Some shotguns in SW2 have differing traits. Examples are the CS-723 Decapitator, which is classified as an explosive shotgun, with the pellets dealing explosive damage. And another is the FIW-II HolySpear, which utilizes energy projectiles and has a penetration ability similar to the Morpheus and Spreader from SW:AI.

Shotgun damage is amplified by 30% when the SPD-005-a backpack is equipped. (That is to say, a shotgun's base damage and the power bonuses offered by armor pieces are multiplied by 1.3). However, all other weapons will get a 10% decrease in power.

*Note: While the Morpheus and Spreader's in-game text classifies them as Laser Guns, all of their in-game properties are more consistent with that of the Shotgun class. Both even receive the 30% shotgun damage bonus from the SPD-005-a backpack, but does not receive the 30% beam weapon damage bonus from equipping the full Atom Armor. The one laser-like property they share is that their shots appear to be able to pierce through multiple enemies.

Note 2: The A22CA Earthbreaker from Payback and the Spreader from Alien Invasion have identical 3D models.