Rocket Propelled Grenade (English acronym) launchers are AOE weapons that shoulder-launch High-Explosive anti-personnel rocket-propelled warheads, which deal splash damage to all enemies in a large radius. These weapons are slow on the trigger and are quite expensive in ammo consuption, but are very effective in clearing a horde of aliens at your doorstep.

RPGs should NOT be used on boss fights (Black Stars is somewhat of an exception), unless you want to make your teammates angry or don't care how fast you kill the boss. You'll also notice that the RPGs travel far too slowly to be effective; additionally, they have a very poor firerate, making them an unwise choice for boss fights or as a main weapon in PvP, although they travel slightly faster in PvP. The Cygni Armor provides a 20% damage bonus to RPGs making it a strong efficient weapon for RPG users.

The RPG-21 is the standard rocket launcher for low rank players. It is effective for clearing aliens in the first 3 singleplayer levels, and is cheap, only costing $300,000.

A much more powerful RPG, the RPG-24 is the heaviest of all weapons in the game. The RPG-24 may have a -2.5 speed reduction, but when fully upgraded it deals 1575 damage per shot. It is effective in almost all levels in single player mode.

The RPG-31 is the most powerful of all RPGs, as well as the fastest firing weapon in it's class. It's initial base damage is 750 per shot, and when fully upgraded, it can kill all aliens in a single shot. Energy consumption is huge, 350 energy per shot. The RPG-31 can be bought for 280 mithril, due to it being expensive most players would prefer the Black Stars because of it's three-rocket launch, cheaper than the RPG-31 and lower speed reduction.

The RPG-31's damage has been scaled down in PvP for balancing, a reason why players prefer the Black Stars for combat.

It is a unique weapon in the RPG class. It fires 3 rockets per shot, each dealing 240 damage (rank 1). It the slowest in fire rate compared to the other 3 launchers. The Black Stars can be used in boss battles, and a medium-close range weapon in PvP. There are also firing glitches as you can see below.

It is also the lightest weapon in its class.

<Thanks to Drexiel for the info for RPG-31 upgrade calculations>

RPG-21 in the customization. 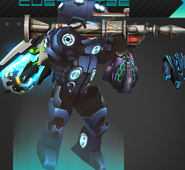 RPG-31 in the customization.

Crosshair for RPGs in Alien Invasion.