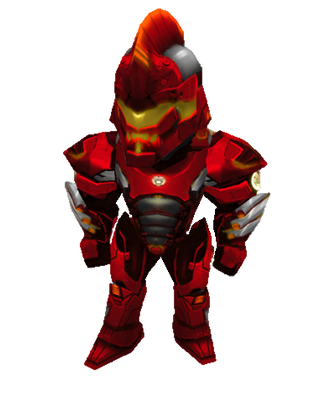 The R.O.M.E armor set was released in the 2013 Christmas update (version 2.70). As with the Cygni armor, a complete R.O.M.E. suit will grant an additional +1 speed, as well as a +10% firerate and +20% power for all Grenade Launchers. To top it off, a +20% gold bonus is also acquired with the full set. Aside from the 220 Mithril required to buy the hands, the rest of R.OM.E armor costs only gold. This suit's high SPD boost seems to be designed for the Xmas Surprise boss introduced in the same update and is currently one of the strongest armors in the game. The R.O.M.E is commonly paired with the J.O.K.E. in PvP due to its 20% Grenade Launcher bonus, which makes the J.O.K.E. a significantly bigger threat than the Trinity.