PvP, which stands for Player versus Player, is a game mode quite different from the original strategy. Instead of defending your homeland from packs of ravaging aliens, your weapons are now turned upon fellow players in a brutal fight to the death. PvP in Star Warfare includes live battling and online matches against other players, and can only be accessed with an Internet connection.

There are currently 6 different modes of PvP:

Team Deathmatch (TDM) is a type of PvP game mode that includes two teams of players fighting against each other. In Team Deathmatch, each kill is worth 40 Points. There is a limit of 4 players per team, totaling 8 players split into two teams. Once a team reaches the score goal of 500, 1000, or 1500, they win the match. There is also an option to create a timed match: 5, 10, and 15 minutes matches. This applies to all PvP modes. 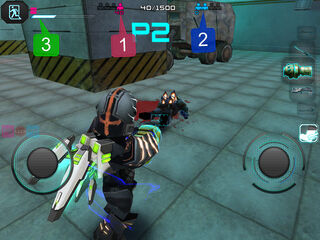 1 - Your Team. The filled in color represents how many people are currently there.

2 - Opposing Team. It consists of the people whom you are supposed to attack.

4 - Wait. Wait 10 seconds until you may be revived again.

4.5 - Mithril. You may use Mithril in order to revive again with full health and no wait time. You have limits on how many you can carry into a game though.

Free For All (F4A) is another PvP game mode similar to Team Death Match, but instead, all players are on their own and fight against each other. Simply put, it is each man for himself: anyone can attack anyone. The total amount of players is limited to 8. Each kill is worth 50 points in Free For All modes. 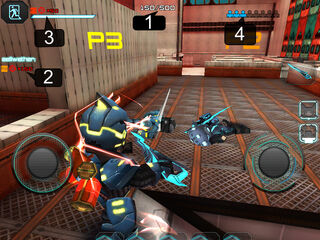 1 - Current Score. Everyone has their own individual score, so the score displayed above 1 is the current Bellwether's score. When the Bellwhether gets enough kills, the round ends.

2 - The Bellwether. This player has the highest score in the round at a given time.

4 - Number of Players. The number of players currently in the arena is displayed there.

Capture The Flag (CTF) consists of 8 players and 2 teams. The goal of each team is to obtain the flag and secure it until the flag timer runs to 0. The only way to get score is to capture flags, which are worth 100 points each. Kills do not score any points in this game mode. A flag automatically spawns in a random location throughout the map. The player who reaches it first becomes the flag-holder. When he is killed (or leaves the arena) the flag is dropped and may be picked up by friend or foe. When picked up by another teammate, the counter picks off from when it was dropped. However, if it is picked up by an opponent, it resets at 40 seconds. 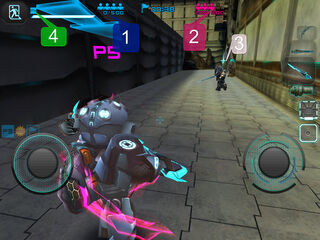 1 - Your Team. Like Team Death Match and in Capture The Flag, there are two teams who collect individual points.

4 - Your Player Info. Unlike Free For All, your score along with your team will be displayed above 1.

All For One (AFO) is similar to Capture The Flag, except that all players are against each other (as in Free For All.) However, the player holding the flag will be targeted by ALL other players. A number amount of players max out at 8, and each capture is worth 100 points.

If the flag is stolen, the counter will not reset, though it will start at 0:09 if the previous carrier was less than 10 seconds from scoring. Because of this feature, it's best to watch out for exploiters who kill you at the last second to steal the flag and score while you're waiting to respawn.

Note: when you make a capture, a red aura surrounds you. This duration last 10 seconds.This aura provides the same bonuses as a hyper clip. Each capture gives you a short hyper clip bonus.

Very Insane Party (VIP) is a game mode unique to all the others introduced in the update 2.50. However, it still has some features of CTF.

The players are separated into 2 teams and must hunt down a specific player that is randomly chosen for either team. The player who is chosen becomes surrounded with a pink fire-like aura and must survive for 48 seconds. When the 48 seconds is over, the player's team gets 150 points if the player chosen survives. If the player is killed, the other team automatically scores 100 points. The first team to reach the score threshold wins. When there are no players left on one team, the match ends automatically.

When you score, a red aura surrounds you just as in both CTF modes and still holds the same properties as a hyper clip. The duration of the hyper clip is 10 seconds. Andromedae and Phoenix armors are strongly recommended for survival in this game mode.

The pink-fire-like aura that surrounds the chosen player also seems to have defensive properties, like a force shield.

Also, When you become a VIP, you will get full health bar. When dead, and are chosen as a VIP., you will insta-spawn. To win this game, players must cooperate together to help the VIP survive.

Catch Me, or abbreviated C.ME, is a new game-mode introduced in the Version 2.70 update.

This game-mode can be played only on the map 'Bunker Party', where a 'We Wish you a Merry Christmas' tune can be heard throughout the map. Little interactive gift-boxes can be found bouncing around in the map on springs, producing comical dialogues when shot at.

The primary objective of the game is to destroy as many of the 'Boxes' possible, as the 'Boxes' award varying amounts of points when eliminated. There is a variant of the 'Box', a fairly larger and tougher gift-box with a question mark on each side; this larger 'Box' offers a bigger amount of points when destroyed. There is also a 50% chance that the larger box will explode. Anyone caught within its blast radius will receive a large amount of damage. There is only one Big Box at any given moment, the location denoted by an arrow on the screen above the player. The first team to the set limit amount of points wins the round.

Shooting small 'Boxes' awards 5-10 points, but is not worthwhile as the points are little and the method is ineffective compared to killing the toughened 'Boxes', which award 100 points for each one eliminated. Killing players on the opposing team can give 50 points.

In a game of Domination, two teams are pitched against each other in a race to control the three objectives in the map. A given number of points is awarded to a team each second they control a certain objective. The team that reaches the score threshold first emerges victorious from the battlefield. The objectives are marked with a ring inscribed on the ground and a light beacon streaking into the sky. The beacon shaft will adopt the color of the team that is occupying it and remain white if it is neutral.

King of the Hill

In Mutant, one of the players would be mutated to a Boss (in example; Metal Crawler). The players' goal is to kill the mutant/beast. The mutant's goal is to survive as a mutant. Points vary in this mode. The more damage you did to the mutant, the more points you'll achieve. This mode is unique, as you can play for a limited time. Meaning, the UNCC admin would set dates for you to play Mutant (in example, 1 January - 5 January). You use your PvE/Co-op setup to play in this mode, unlike the other mode which requires your PvP setup.

How to Create Your Own Game

1 - PvP Mode. With this bar, you can select which type of fighting you would like.

2 - Score/Timer Adjuster. With This, you can adjust how much time/ how many points it takes to complete a round.

3 - Score/Timer. With this, you can change what type of countdown you would like for your rounds to end with. Note: Capture The Flag does not allow timed rounds, only scored.

4 - Area Type. With this, you can select where to fight, whether a Space Station or even a Stadium.

5 - Rank Limitation. With this, you can adjust what ranks can join your area.

6 - Autobalace. Auto-balance feature occurs when a player dies. when the score/ player amounts are drastically different, (for example Blue team has 1 person and a score of 120 while Red team has 3 people and a score of 800) A player is switched teams in order to try to balance the game.

7 - Password - Another player filter. With this, you can have private matches with other players, or just relax and chill out in the arena.

This is a common occurrence in Free For All (and other modes too, but to a lesser likelihood). Players will try to team up will signal other players by withholding fire and fast-switching their weapons. In particular clans, the player also fast-switch only two weapons at a time while still having other weapons to switch to. This then identifies another player who is just fast-switching for fun, or simply to have an enemy during the match. Teamed players will normally stand around near each other and not do anything unless there's another player who refuses a team offer. It's also possible that team members will betray one another. The traitor and the victim will duel each other while other players sit back and watch. Teams normally consist of high-ranked players and they commonly target low/medium-ranked players. Rookies are not as familiar with the game and generally, get rejected when they attempted to team up, but even if veteran rookies (who restarted the game) know the signal, higher ranked players will usually kill them anyways.

It appears that teams only occur in order to access map glitches without disturbance and to aggravate other players when they join matches. Sometimes all eight players team up in F4A and fire their weapons into the air to have fun. Other times it is a group of people with the same armor set or same pieces of a armor, this results in them not shooting each other and killing other players only. Any other possible explanations are welcomed.

When joining a Free For All, the game description lists it as "Free Of All."