Welcome to the Photographer's Club, where snap-happy enthusiasts have captured the weird, the funny, and the plain bizarre in the world of Star Warfare:Alien Invasion! 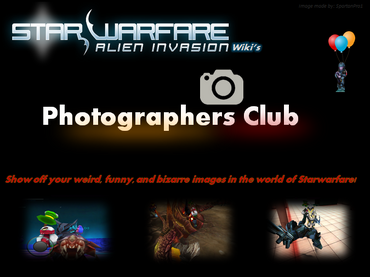 Did anyone drop their Passer??

Hold the Sword up

No Sword? Try this one!

you can touch meh if you cant see meh >:D

I died and used the ability to kill the whole opposing team. It was both funny and sad.

How to become a man.

If you want to know the amount of enemies in the Wrath of Mantis stage, here's your answer.

If you want to know how many enemies there are in the Siegfried stage, here's your answer.

Game froze while in this position.

Don't even try to rustle.

A cookie for you if you get the reference.

Should I? I think I should.

Sleeping on the job.

Where are you going?

How does that work?

Can smash with Trinities. Best for Anti Trinity users

How You shoot your sniper?

All Knight may die easily.

"Ah, just me. Chilling up here." I don't know if I should be amazed or worried.

Who's controlling this sentry?

Where are you going?

Serpent gives me a taste of his mouthwash...

SiegFred, the leader of the Alien Overlord Council.

Serpent: "Siegfried! Wake up! The R.O.M.E. guy's getting 4 mithril from you!"

Atom and X-Field kiss in the shield...

I call on the Dempster hax...

Lets all kill the guy with fire! (Pink Party)

So thats what the upper level leads to..

* Swings head to look at you * Hey, isn't my new head so OP? Wait– why are you running away?

Roll on Thunder, roll on!

My body's made of these guys? O_O

Wait, Draco Malfoy plays Star Warfare???!!! "You got a problem with that, Mud-blood?