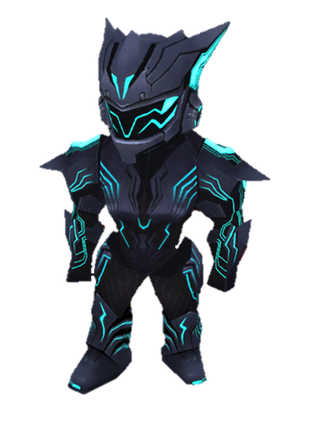 Strength: C
Defense: A
Health: A
Agility: A
Versatility: B

The Phoenix Armor is considered a Higher mid-tier armor, and is one of the first armors which requires mithril to be completed, due to its Head and Leg armor costing mithril (alongside the Pegasus)

In the earlier versions of the game, the Phoenix was one of the most popular mithril armors due to its combination of high stats and bonuses: it has the highest HP and speed of the Rank 7 armors, making it comparatively well suited for extended fights in PvE and PvP.

One of the Phoenix's unique set bonuses causes players to regenerate 60 HP per kill. While the effect is relatively negligible in PvE boss fights, a player could regenerate extensive amounts of HP in Survival mode. In PvP, Phoenix users regenerate closer to 25% of their total HP, which made the armor extremely potent in earlier versions of the game when combined with its HP and agility.

Currently, it is still an armour set that performs comparatively well in PvE and PvP when compared to most armor sets released before the v2.60 Halloween update in 2013. However, it is severely outperformed by most of the new armor sets from the Knight onwards, and can even be rivalled or outmaneuvered by certain "glass-cannon" strategies and set-ups from the Thunder and Atom armors in both modes.

Fighting As a Phoenix User

While it may not necessarily sit well with some players, an effective strategy in PvP is to target players with low health in order regenerate 25% of your HP. Other strategies include using defensive backpacks such as the HYD-00-IX to further boost longevity, or the TRI-O-AVATAR to minimize the damage you're taking long enough to kill a strong opponent for HP regeneration.

Against older armors, the HP regen ability supports highly aggressive play styles with the Phoenix, as you can afford to take damage engaging other players, though provided you can kill them. While it is also possible to fight more defensively to constantly preserve your health at 100%, this seems to make poor use of the Phoenix's capabilities as you will not be experiencing the full effects of the HP regeneration.

The HP regeneration of the Phoenix Armor encourages most Phoenix users to adopt a highly offensive playstyle, as Phoenix users can afford to take some damage provided they earn the kill, thus regenerating HP. Therefore, a controversial but effective tactic would be to target the player a Phoenix is trying to take out, as stealing the kill results in the Phoenix regenerating no HP. Alternatively, you may also try and help the non-Phoenix player take out the Phoenix user, but you will be more likely to kill both of them with the previously suggested tactic.

If you have somewhat low health armor and a Phoenix user is hunting you, STAY AWAY from them and dodge. Use a gun that doesn't have a speed penalty and good DPS. It might take a little while, but it is an effective strategy. Also, do this on maps where there is a lot of open dodging space like YB Factory.

When using one of the newer armor sets from Knight and onwards, you can choose to aggressively engage the Phoenix user head-on provided your weapon is sufficiently strong enough -- you will very likely kill the Phoenix faster than it can kill you due to your higher HP and damage output.

*Note 1: In PvP, each kill regenerates close to 25% of the Phoenix's total HP