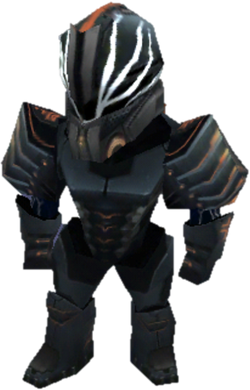 Strength: B
Defense: A
Health: A
Agility: A
Versatility: A

Perseus Armor is a top-tier armor unlocked at Rank 8, along with Cygni Armor and Andromedae Armor. It offers the most HP of any armor that can be bought purely with gold, and the fourth highest HP of all available armors. Arguably one of the most well- rounded armors for its price, it provides good power and gold drop bonuses and also offers higher EXP gain rates.

It was a highly popular armor before Knight and R.O.M.E given its affordability relative to the other end-game armors. In addition to its large amount of health, it reduces the damage taken from all sword attacks by 30% in PvP, making the popular Windblade less of a threat. Given the bonuses it offers for its price, it remains a highly recommended gold armor.

Like most final armor sets such as the Andromedae and the Knight, the Perseus possesses superior amounts of life and suit bonuses. Its melee damage reduction makes it well-suited to close combat situations. A recommended backpack is the Tri-O-Avatar because of the combined effect of the suit and ability bonuses: activating the bag's effect alongside the suit bonus makes the armor nearly impervious to melee attacks, making this combination is highly useful in PvP. However, the Tri-O-Avatar's damage reduction ability only lasts for 5 seconds, where as equipping the VISNU bag will offer more permanent defenses (20% damage reduction for your team). If you don't have mithril to buy the VISNU, it's good also to use the TT-05-b backpack, which provides 20% less damage taken, the same as VISNU, but has less HP and less EXP gain.

-It should be noted that its melee resistance does not apply to PvE.

The Perseus Armor, similarly to the Cygni Armor, is considered a "budget armor" as it costs no mithril to complete, unlike the Pheonix and Pegasus. It ha well-rounded power, defenses, speed and even gold bonuses, making it an ideal all-purpose armor for both PvE and PvP.

Next Suit: Chaos Armor (Chaos Armor offers less HP, but has an ability)