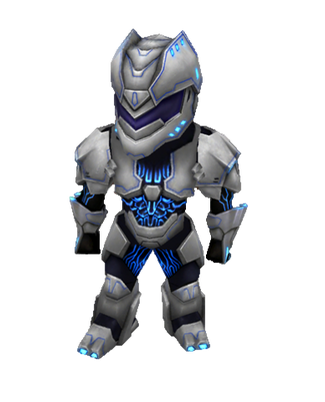 Strength: A
Defense: A
Health: B
Agility: C
Versatility: C

The Pegasus Armor is considered a higher mid-tier armor due to it being unlocked later in the game, and is one of the first armor sets alongside the Phoenix which requires mithril to complete because the Chest piece costs mithril.

The Pegasus Armor possesses the unique set bonus of providing a 15% chance of negating damage taken from an attack. The damage immunity bonus is also granted by the HYD-00-IX, Spectre and the Jin.Jingle backpacks.

The Pegasus Armor's lack of speed bonuses makes it somewhat problematic to use weapons with speed penalties in PvE, though this can be mitigated by switching to a lighter weapon when the player is not firing their heavy weapon. Although it is slower than most of the other "Top Tier" armors available, it offers 25% base power, the fourth highest power offered by any armor in the game (surpassed by Strike Armor, Knight Armor, and R.O.M.E Armor.) Also, note that the Thunder and Atom sets can exceed the POW bonus of the aforementioned armors under certain conditions.

In PvP, this armor is commonly paired with the Spectre backpack to obtain a damage negation chance of 45% or used with the Jin. Jingle pack, giving 10% of immune from attack ( The usual being 15% from the suit and 30% from the Spectre but in this case a 10% immune from attack provided from the Jin.Jingle) for a plus 2 speed and 15% more POW than the usual combo with the Spectre, making up for the lack of speed bonuses. However, the armor's overall defenses are somewhat unpredictable, as longevity is dependent on how much damage is negated by chance. The armor is very useful against Snipers and Slashers as both have rather low firerates.

Next Suit: Draco Armor (it should be noted that Draco armor provides less health than Pegasus armor, but provides a -10% damage bonus.)