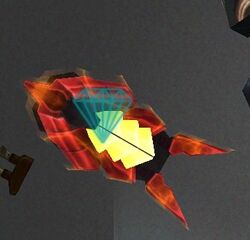 The Nailgun is one of the new weapon classes that was added in the Version 2.10 update. This weapon class fires homing hot nails at a decent fire rate. Due to its strong homing, one combat strategy with a Nailgun is to camp while aiming in an opponent's general direction: the homing projectiles will generally find their mark provided they are not blocked by another obstacle.

The White Drill is the only weapon in this class, and it was introduced in Version 2.10. The gun fires pretty fast and the nails target and follow the opponent (alien, player, boss, etc.) until it hits a wall or the enemy. Interestingly, it appears as if the White Drill's power was revised in the Version 2.20 update: its starting power is now 180, while its fully upgraded power is 630.

The White Drill is one of the most economic weapons on energy in terms of the exchange of energy to power. It only uses up 45 energy per shot and has about 35 POW less than the LIT07, which uses 65 energy per shot, not to mention you literally will almost never miss a shot, since its pretty difficult to make a shot from the Nailgun go to waste by hitting a wall or something cause of its heat seeking ability, so if your looking for the gun that packs the most punch for your energy cost, the nailgun is a good gun to buy.

The nails are somewhat sluggish, being a bit faster than the Energy Glove's blasts and having the advantage of tracking down enemies. Another advantage of the Nailgun is that its nails are explosive. They explode on impact upon either the enemy or a wall. They have a limited radius, being so small, but are good to use when enemies come in small groups, blowing up 2 to 3 at a time when fully upgraded.

Its upgrades at first are relatively economic or "cheap" when compared to the LIT07 or the Energy Glove's cost per upgrade. The power may seem low for being considered one of the more "advanced" weapons, but again, with the semi low cost per shot (considering the level of damage) plus whatever damage bonuses you have in your armor of choice, this can be your main "assault weapon".

This weapon can be used for bosses, but is recommended to only use it if you have High levels of speed( 9 and up) as to be able to avoid oncoming attacks, since using the White Drill against a boss will take a while longer due to its .50 firerate. This weapon is also recommended for the PvP mode Catch Me , as the homing nails will follow the jumping boxes, reducing trouble hitting them.

Since Version 2.10, the White Drill is the only Nailgun to date and can be bought with 166 Mithril, In PvP, each projectile of the White Drill does damage comparable to that of an Energy Glove's blasts, but is similar to the Energy Glove, not recomended for PvP.

Note that the projectiles will actually disappear without exploding after travelling a certain distance.

The weapon glows when fired.

I'm leaving both upgrade costs up for now, because there's a chance that the White Drill's upgrade costs were actually revised after its initial release. My basis for this claim is because the White Drill's upgrade powers were actually revised after its release (its level 1 power was revised from 160 to 180, which resulted in every other upgrade power changing in accordance with the upgrade formula). --Undead.exe (talk) 05:26, January 30, 2013 (UTC)

White Drill, along with Black Disk, had its target reticle removed in 2.51. When equipped in the first slot, there will be no target reticle unless it is switched, where it will take on the target reticle of the last weapon used before switching into it. This is possibly due to the UI Optimization described in the update notes of 2.51.