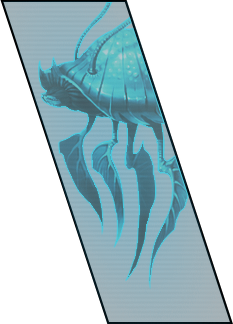 The Myth371 is an alien encountered in Frozen Pole. The Myth371 is a counterpart to the Trilobita, having similar attack styles but a new different look. The Myth371 is generally an easy minion to remove but is also an ambush and high damage dealing type of Alien. It's ability is that it could teleport making it dangerous if it teleports and lands a Plasma Ball on you. The Myth371 appears as a blue jellyfish in a type of water force field. The field does not affect damage deduction.

The Myth371 will also take it's time to fire like the Digger and the Tacorlion. Your general strategy against facing the Myth371 is to take it down immediately. The alien will teleport near you if you move too far away from it. This means that if the Myth371 is not taken care of immediately it will be a problem later on as it can ambush you with a giant plasma ball. The Myth371 does not appear in Star Warfare: Alien Invasion. However, the alien was derived from the Trilobita, which makes them cousins.

The Myth371 will also appear in early levels such as Banished Battlefield if you are playing on heroic like other aliens such as Mambull, Dempster, and Black Mayfly. Your main tactic to defeat these guys is to circle around them so they will get confused on when to fire.

You can use the same tactics from Trilobita or Tacorlion. If you charge straight at them their Plasma Ball will hit you so be cautious whenever you are charging at a group of 3 Myth371's. And as always if you hear a slower version of the Green Lady's squeaking sound that is the sound of a Myth371 spawning. Note that the Myth371 doesn't always make this sound so it is hard to predict when they spawn.