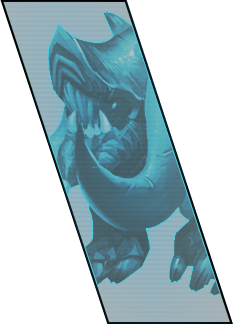 The Mambull is the sixth alien introduced into the Star Warfare series. Mambulls are tanky, muscular aliens that can dish out a ton of damage using its charging attack. However, once a player acquires a powerful weapon, the Mambull becomes easier to defeat. It resembles a bull or rhinoceros, as its name implies. It can be considered a miniboss due to it's huge health pool and ability to deal a lot of damage.

The Mambull will attack by charging forward, knocking down and stomping on its target, causing massive damage. Mambull particularly spawns on later levels such as Energy Core and all boss levels. Fortunately, however, it spawns in very small numbers, usually only once or twice per level. The damage and health of a Mambull increases with each level, making it more difficult to kill. It is advised to kill Mambulls by using weapons with a high rate of fire, don't slow you down to much, and have a good DPS. Laser Guns or Machine Guns are some of the most useful weapons for fighting it. Light Swords are not recommended to take down the Mambull, due to the possibility of taking melee damage, and getting run over.

In Star Warfare: Alien Invasion, Mambulls always drop gold when killed, as opposed to Mambulls in Payback, which drop gold at a occasional rate. Usually, it appears in the very start of the alien wave or close to the end.

Note: Take caution when standing on a slanted area, as the bull can charge into you multiple times and instantaneously kill you.  Also take caution that Mambulls can attack you through walls if you are against one. They are the largest of all the other aliens.

Some Mambulls are designated as priority targets in a few levels in Payback, having a health bar on top of them.

Mambulls do not have a mutated form.