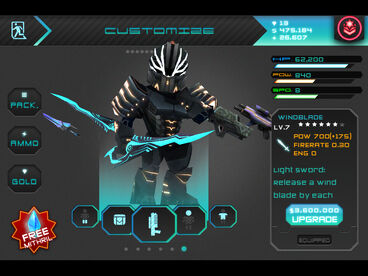 Swords are melee weapons that can be used when out of ammo, saving ammo, or farming. Swords are relatively effective for killing aliens, but they are a bad choice when fighting a boss. Since they are melee weapons, you will have to get close to the target to attack it (Windblade is an exception). So trying to kill a boss with a sword is almost impossible because you'll die by knocking into the boss repetitively unless you're using the Windblade, which is considered freeloading. Note that freeloading is frowned upon with the majority of the community. Especially if you have the XO2B-Freedom, and yet insist on using a blade (Windblade being the most prominent) during the boss fight.

If you play on the endless wave mode and run out of ammo (you won't if you're using FREEDOM), the Light Swords would make be an effective weapon to use as it costs no ammo.

The Light Swords can make good ammo savers (they're useless if you're using FREEDOM) because you can save ammo until you fight a boss to unleash your bullet storm, in this case, every thing above Wrath of Mantis. However, using the Windblade on the boss itself is considered freeloading.

Blades are very good with farming (yet again, unless if you have FREEDOM) as you can get 100+ kills only using your blade. You can use the BLADEMASTER backpack to increase the damage of melee attacks, allowing you to kill aliens faster (Front Line, the first PvE map is a recommended farming spot for this tactic).

Note that gold-farming with swords usually comes at a time/cost trade-off: While you are no longer using ammo to take out aliens, you are also killing at a significantly slower rate than if you're using a gun, meaning that it takes you longer to finish a match. If you can only play for a set amount of time each day (e.g. one hour), you will likely earn more gold in that one hour by using ammo to complete more boss fights as opposed to saving ammo by using a sword.

Despite being considered as freeloading in PvE, the Windblade is excellent at PvP matches due to its high power and it is frequently used. However, it is best not to use swords against Perseus users (unless you have the Blade-Master backpack), as the Perseus has -30% melee damage taken. The Cutter is an excellent rookie-friendly sword, as it is affordable and has a 210 DMG when fully upgraded. However, Light Swords pale in comparison to the raw power of the Trinty or J.O.K.E, the dominant close range weapons.

Another advantage is that it does not decrease your speed as you run.

<Thanks to Drexiel for the Windblade info>

Note: The Windblade's waves do 40% of the damage displayed on the Customise screen for the Windblade's effective power. Click here for the test data proof.