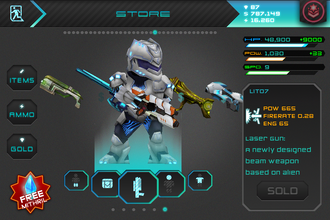 <tabber>SW:AI=Laser Guns are medium-powered, fast-firing weapons that are similar to Assault Rifles, in that they are well balanced. These versatile weapons work well with all fighting styles, whether in PvP or PvE. They not only have efficient attack power, but their beams can also pierce through enemies, allowing for multiple kills at once.

As of Star Warfare Version 2.40, every weapon in the Laser Gun class (as well as certain Assault Rifles) is subject to a peculiar fire-rate glitch: After playing one PvP match with a Laser Gun equipped, the weapons' firing rate increases dramatically. The change varies for each laser gun, but the increased rate of fire does NOT raise the weapon's total damage output and only the sound of the fire-rate is increased. It is not recommended to get the LG002B as it is much harder to get than the M2456S, and it has a significantly lower DPS. The Morpheus and Spreader also show the penetration trait of laser guns.

The first laser gun and costs only 8 mithril. It is the starting laser gun and is much hard to get than the M2456S, which only costs gold. Only 50 energy consumed per shot.

It has the fastest fire rate of all laser guns, .25 second fire rate and high damage. Most players can use the NOVA27 if they haven't acquired the LIT07 yet. The NOVA27 is slightly expensive which costs $750,000.

The LIT07 has higher damage than the NOVA27 and has a slower fire rate (0.29 versus 0.25). The initial damage it can deal is 190 per shot and can be bought for 95 mithril. It is recommended to get the AST-KK for PvP, but the LIT07 is best when paired with the Atom or Dec.24 armors.

|-|SW2=Energy Rifles (same as laser gun in SW:AI) are fast firing weapons that are similar to assault rifles except that these weapons have the ability to penetrate through your enemy and damage others behind it. Energy Rifles should also not be used as a primary weapon because of its weak power with the exception of FXVV Light, which has an extremely fast firerate.