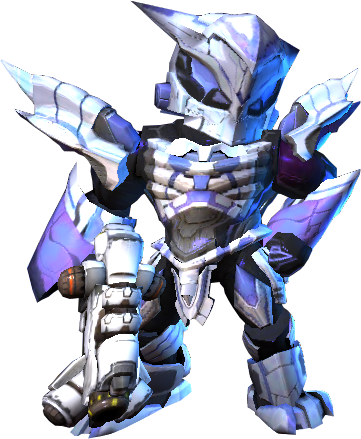 Krypton Armor is the eighth armor available in Star Warfare 2: Payback. It can be unlocked by finishing Stage 2 Heroic. It is considered a high-tier armor that is designed for veteran players because of it's balanced stats and high health.

Wearing the full Krypton suit confers the Phoenix set bonus, which increases Bullet and Energy DMG by 35% and Max HP by 20%, as well as having a passive ability of healing 240 HP per alien killed or 5% per player defeated.

When using this set in PvP, players are recommended exploit the armor's longevity by using perks such as Promoting Blood, which boosts healing effects by 50%, and Bloodthirsty, which regenerates 10% HP upon a kill while using a level 4 Hygeio with an increased Max HP passive. This can allow the player to have over 80,000 HP, as well regenerating health at a rate of 180 HP per second and 22.5% HP per kill, greatly increasing player longevity.

Like the previous two armors, Krypton Armor's appearance pays a homage to the first Star Warfare: Alien Invasion due to its resemblance to Phoenix Armor, both in appearance and utility.