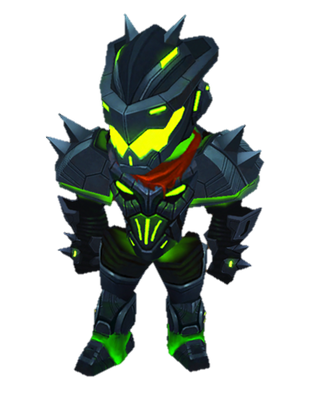 The Knight armor is a top-tier suit unlocked at Rank 9. It was added to the game in the Version 2.60 2013 Halloween update. As of Version 2.91, it has the highest HP in the game, 70,000 HP. Alongside a total power bonus of 30%, this armor offers the unique set bonus of increasing all weapon fire rates by 15%, which can arguably result in total damage output being increased by 17.6% after calculating all applicable power bonuses. Similarly, the R.O.M.E armor set also grants a 10% fire rate bonus.

This armor is one of the more popular armor choices in PvP if players can overcome the cost of its headpiece. The armor's HP and power completely outstrips most low-tier armors, although skilled users of mid-tier armors with a good strategy can still defeat Knights. Despite having higher levels of HP in PvE, factoring in the damage scaling in PvP suggests its capacity to take hits is still weaker than that of the Andromedae given its lack of recovery abilities. Additionally, other players may prefer R.O.M.E armor for its +1 SPD bonus.