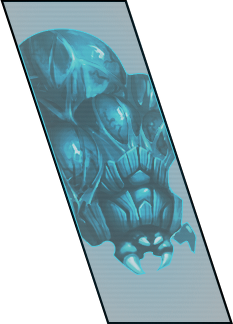 The Green Lady is the fifth alien introduced to the Star Warfare series. This species of alien has very low HP, above-average speed, and very high attack. Green Ladies' only attack is a Kamikaze like attack. Green Ladies cannot deal continuous damage, because once the alien gets near a player, it explodes, dealing massive damage to nearby victims. This acid does not damage the player if it is lying on the ground. Note: Green Ladies do not have mutations.

Beware of a squeaking sound!

It is not recommended to use melee weapons to kill them, because you will likely be caught in the Green Lady's blast radius when it dies, with the Windblade as the exception if you use its "waves" (though it is possible to avoid the splash damage if you hit it with the absolute tip of your sword.)

In later levels such as Stadium Arcadium or Fire in the Hole, these enemies deal massive amounts of damage that will put a major dent into any armor set.

Note: When a Green Lady self-destructs, it will count as a kill and a combo, but is not recommended to get hit by one just to keep a combo going (unless you have a large kill streak going)

A good weapon to use is a ranged weapon, as it will usually kill them almost instantly. It is recommended that you turn your volume up so you can hear whenever a Green Lady spawns.

Whenever you hear a squeaking sound, try to withdraw fire and find where the Green Lady is before you proceed with killing the other aliens, or else you could be blown up by a different Green Lady.

It is important to be knowledgeable of enemy spawns in most PVE maps, because Green Ladies can sometimes sneak up on you from behind. Getting into certain camping spots is good for avoiding this altogether.