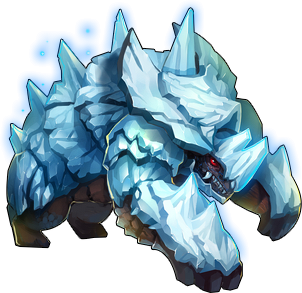 Frost Stone is a boss found at the end of Stage 3. This boss has very fast attacks and will annihilate you if you aren't fast. The Hygeio VOID is recommended during this boss. The boss also has a very large amount of HP.

This boss has very fast attacks, similar to Xmas Surprise. This boss will get harder at around 30% HP

Big Snowball: Frost Stone scoops into the ground with both its front legs and then throws a gigantic snowball at you. Can be avoided by quickly moving from where you're standing when he begins scooping into the ground. He will start the fight with this attack.

Snowball ATK: Frost Stone raises one of his arms, and then does a backhanded swing which sends a cluster of small snowballs in a spread out a wave. This is relatively easy to dodge as the snowballs are spaced out. Resembles one of Siegfried's fireball attacks.

Ice Stalagmite: Frost Stone pounds the ground twice with both of its fists, and three ice crystals sprout out from the ground. These can be destroyed by any type of weapon. The player will be damaged if he comes into contact with ice crystals.

Bounced Snowball: The boss stands up on its hind legs momentarily, then launches up in a ball and rapidly falls on you. Not only you must have anticipation, but a speed of 6.5 is needed. Can be avoided if the player stops attacking and starts backpedaling before he jumps from the ground.

Snowball: Frost Stone will pound the ground with one of its fists, before curling into a ball in an attempt to roll over the player, dealing mediocre damage. You will need at least speed of 6.5 to dodge this.

Rebounding Snowball: Frost Stone may repeatedly chain his Snowball attack multiple times, pausing momentarily when he reaches a wall before attempting to run over the player again. Note that this attack can actually hit multiple times if the player is pinned against a wall.

Clap: Frost Stone swipes the direction he is facing dealing high damage to anyone who is hit.

Ice Shield: Once Frost Stone's health goes down to a certain point, about 50% or less, he will start to dig up the ground and cover itself in "ice armor".  That is its appearance, but it is not clear yet if it does increase the boss's defense.  However, it does improve his melee attacks by allowing it to leave an icy trail that can damage you when stepped on.  It can be deadly if uses these attacks repeatedly because the ice trail can get the way when you are trying to dodge the direct attack.  Luckily, you can break the ice shield if you deal enough damage.  However, he is able to put it back on at any point afterward.

*Note: Amount of Gold can be influenced through people playing and or Gold potions/2x Daily Boss Rewards.

Recommended Armor (Normal): Eagle and up. Avoid armors under Eagle as they have lower HP and you'll get seckilled if combined with crippling speed. However, it IS possible to beat the boss by using Neon.

If Heroic: Falcon and up. Avoid color combination like "Siege" since they can immobilize you even it has HP regen per second (unless you equip a VOID with Rabbit Foot and a backpack that increases speed).

Recommended Weapon (Normal): EGT-42 Uranus as it can deal massive damage to the boss over time.

If Heroic: LDK-4410 Crescent, FIW-ll HolySpear and RABS-ll Harbinger can take chunks of health off from the boss.

And as ALWAYS remember to take potions as your main helper in this boss fight. You don't need much of any backpack to beat the boss.