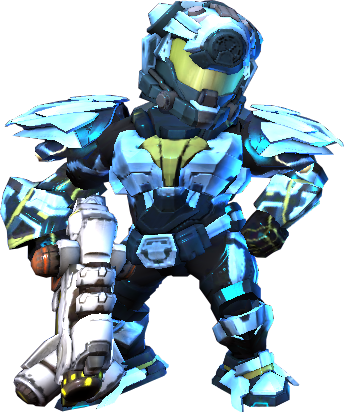 Falcon Armor is the seventh available armor in Star Warfare 2: Payback. It can be unlocked by finishing Stage 1 Heroic.  It is considered a higher mid-tier armor due to its extremely well-rounded stats.

Wearing the full Falcon suit confers the Sea Giant set bonus, which increases All DMG, Max HP, Gold earned, and EXP earned all by 20%, as well as giving a usable ability, Titan Skin, that increases All DEF by 50% for 5 seconds. This ability has a cooldown of 60 seconds.

The Falcon Armor is powerful and is generally considered a decent armor for PvP. It looks similar to the Despair because of it's blue and yellow color combination, but in a darker shade. This armor is recommended for fighting Heroic Frost Stone and Cerberlisk.

Like the Despair Armor resembling the Thunder Armor, Falcon Armor bears a resemblance to Tank Armor in addition to Hydra Armor from Star Warfare: Alien Invasion, almost as a hybrid of appearance and practicality.