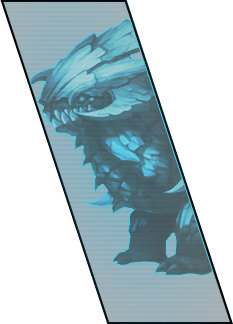 Demsters are the eighth alien to appear in the Star Warfare series. They have armored shells, which makes them unique, as they are the only aliens to have a special skill. Demsters have high speed, high attack, but low HP. While moving, an Demsters will activate a shield that dissipates 75% of the damage received, quartering any attacks on it. The only time when the shield is not activated is if a player stands in the alien's attack radius, making these aliens tougher to kill.

Demsters attack by curling into a ball and ramming into the player after a very short delay. Damage taken from this attack is fairly high, with attacks from mutated Demsters doing damage similar to an exploding Green Lady. Because of this, the Demster is often regarded as an annoying alien as one likely takes a high amount of damage if they do not kill the alien during its moment of vulnerability. Effective methods of dealing with a Demster are to backpedal while firing when they're getting ready to attack, or to use a high-damage weapon to take them out when their barriers are down (e.g. railguns or RPGs). In some cases, a windblade may also be effective if you are fast enough.

The mutated form of the Demster is larger and purple. It takes 0% of attacks when its shield is activated, and has a higher attack along with more HP.

Aside from appearance, Demster now attacks by spinning/twisting and can bite players. In Star Warfare 2, Demsters no longer have the shield ability like the one in Star Warfare 1. A sniper is highly recommended to defeat this rocky alien. Damage taken from its attack is obviously high. Demsters in Star Warfare 2 are slightly slower than those in Star Warfare 1 in speed. When it spins it will stun any enemy hit by it for about 1 second so, try to avoid coming in close combat with these guys or else they can stun you for a Green Lady or Black Mayfly to deal severe damage to you. Elite Demsters are tougher than regular Demsters. Elite Demster's shells are blue and their horns/scales are red. Elite Demsters will usually spin more often then the non-elite version which makes them even harder to kill.