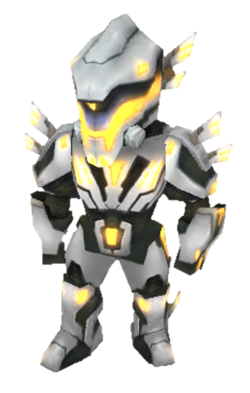 Strength: C
Defense: B
Health: A
Agility: S
Versatility: B

The Cygni Armor is considered a top-tier armor, due to it being unlocked at Rank 8, and is best known for having the fastest base speed of all available armors to date in the game (it's speed ties with the R.O.M.E Armor and X-Field Armor). However, the Thunder Armor can temporarily exceed the Cygni's speed while its ability is active. This aspect gives Cygni users great agility, making it easier to avoid oncoming fire. The Cygni armor set is also effective for backpedaling away from players using the Trinity or any close-range weapons that deal much damage. Its speed can help you escape the aim of Reflectionist users.

The Cygni Armor is currently one of several armor sets which possess hidden set bonuses. Even having taken these bonuses into account, however, the Cygni is tied with the Chaos Armor for having the lowest power bonus of all top-tier armors.

There are generally two ways you can fight in Cygni gear. For one, you can stick with the run ‘n gun method and make full use of the speed bonus, outrunning your opponents. You can also equip a high-powered, close-ranged weapon for a speedy attack and escape. It’s basically a “hit them before they see you” tactic.

*Note 1: to confirm the presence of the hidden HP bonus, sum up the individual HP components of each armor component, and then calculate the difference when the full Cygni Armor set is equipped.

**Note 2: The Cygni Armor's RPG bonus multiplies any power bonuses offered by the armor pieces and the backpack. As a result, when an RPG is equipped, the armor alone offers an effective power bonus of 32%, while factoring in a backpack would require you to multiply the backpack's power bonus by 1.2

***Note 3: Due to the armor's bonus applying to only one weapon type, strength ranks at A.