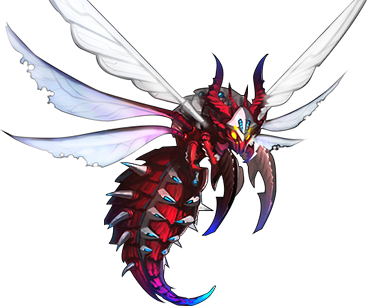 Crimson Queen is so far the last boss to be fought in Star Warfare 2: Payback. She has an insane amount of HP compared to other bosses and is recommended that the player acquire high end gear (Krypton and up). Even Falcon will have a tough time fighting this stage (even before facing her), if it's in heroic. She is a huge red and blue fly that can shoot lasers and drop egg bombs. Compared to Cerberlisk, she is almost TWICE the amount tougher with almost doubled the amount of Cerberlisk's health and more damage. It will take a considerable amount of time before you are able to defeat it.

Note that the names for the bosses' attacks are purely conjectural. These names will not be replaced until a real name is given.

Homing Missiles: Crimson Queen sends a volley of homing missiles towards the player. The missiles can be destroyed, but they can also be evaded if the player has sufficiently high speed and runs in a moderately sharp curve (too gentle a curve will allow the missiles to gain on the player).

Twirling Lunge: Crimson Queen starts spinning rapidly and then flies to the player while spinning. This is one the easier moves to dodge, as you don't have to move much to dodge it.

Queen Beam: Crimson Queen lifts its underside and spews a red, quick beam. This attack is hard to dodge unless you see it coming. This move will try to target you and, if it does but you don't run, the beam will catch up to you, even if you boost yourself when too close.

Bombardment: Crimson Queen flies up and around in circles, dropping fly eggs that explode when shot. These bombs won't last the whole fight, though, as they are destroyed about 5 seconds after the move ends. This is easy to dodge, the bombs are not (due to the Explosion Range added), especially when you are running around mindlessly.

Twin Lasers: After summoning two shards, these will proceed to launch a single, high powered blast directed at the player at random intervals. The damage taken is dependent on the amount of shards active at the moment of the attack. The shards can be shot at and destroyed, but Crimson Queen will periodically regenerate them.

Royal Judgement: Another of the Crimson Queen's signature techniques, it is commonly deployed by the boss at the start of Heroic level battles, the Queen positions herself at the center of the stage following with the summoning of several laser shards that travel from the position of the boss to the ends of the stage and then follow a circular pattern before repeating the aforementioned tactic, all the while drawing a damage trail. This attack is easy to elude if the player is paying attention to its surroundings, however in the event of being caught it can damage the player considerably.