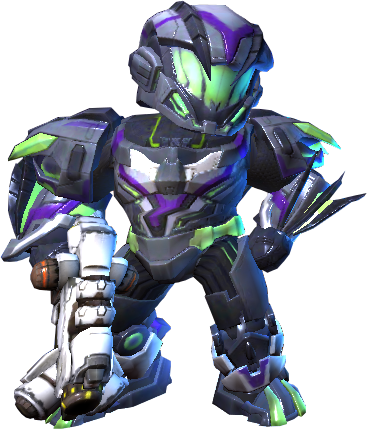 Corrosion Armor is the ninth armor available in Star Warfare 2: Payback. It can be unlocked by finishing Stage 3 Heroic. It is arguably the most versatile armor set with it's superior stats.

Wearing a full Corrosion suit will confer the Magician set bonus, which increases All DMG by 25%, 40% FCD, Max HP by 25%, and Speed by 1. This armor has a usable ability, Previous Skill, that allows the player to use the previously used item/skill/killstreak. This ability has a cooldown of 120 seconds.

In PvE, it works as a balanced armor between offense and gold grinding for improving weapons. The Speed bonus it gives can help avoid Black Mayflies and Green Ladies, as well as the health bonus increasing survivability in long-term endless missions.

In PvP, it is excellent armor as the bonus Speed helps for running towards opponents or taking cover from multiple enemies. It is generally often more preferred in PvP due to the Tank/Speed style of armor which can be dominating in most cases. Generally, it is recommended to pair this armor up with the PWC-I BloodSeeker and Twilight Void since you can ambush players quickly with the bonus speed and can use Twilight twice, dealing massive damage.

The Corrosion Armor is an excellent armor in PvE. It looks as if the armor was built to defeat the Crimson Queen. The health of the Corrosion Armor is better than a Knight when compared to Alien Invasion and currently has the highest HP potential in the game, as its health can exceed 100,000 if you use the correct HP bonuses. It also has a 25% All Damage increase, so you can defeat bosses faster. The extra speed can help you avoid most attacks, particularly those from the Crimson Queen. Also, you can combine the Previous Skill ability with Hygeio to heal twice, increasing PvE longevity. Using the Merge backpack helps as well, as it gives you an immunity shield that has 20% of your HP, and after the shield goes out and not taking damage for 5 seconds, the shield appears again, allowing less consequences for blunders or mistakes. This set-up basically makes you unstoppable, provided that you know how to dodge attacks correctly.

Fighting As a Corrosion User

Corrosion Armor is an excellent armor to use against other players. The Previous Skill ability allows you to use a previously used item/skill/killstreak, so you can get creative with exactly how you want to use it. One way to utilize the Previous Skill ability would be to have the Powerful Attack killstreak. This killstreak allows you to seckill (one-shot) players with any weapon, and every 2 minutes earns you a free kill with this ability. Another way would be to utilize the Catalyst Level 3 ability to blow up players. Use the shield if a person with a sword comes close to you. This usually results in the shield being instantly destroyed and killing the opposing player. You can also use it as a stronger Same-Way Grenade perk. If you die when using Catalyst, the shield will instantly explode. Use Previous Skill while dying, and this will cause another explosion, killing all nearby enemies.

Fighting Against a Corrosion User

Another way to counter a Corrosion user would be to have a Cure (G B G Y) set-up. Midway through the fight, if you use your Cure ability, you can regain full health and will be able to take them down provided that you have a strong enough BloodSeeker.