Collapsar is the first VOID introduced in Star Warfare 2: Payback.

When activated, the VOID goes to the target location and begins to create an explosive singularity. After a few seconds, it will explode, dealing a massive amount of damage to anything in its radius. At level 3, the singularity can pull in enemies, making it even more destructive. Bosses and Mambulls will not be affected by the pull, so damaging them may require some aiming. In PvP, players with high SPD can outrun the pull, the range and strength values being lower in PvP. The damage scales according to the player's strongest equipped weapon. This ability has a cooldown time of 40 seconds. 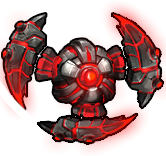 *Note: people that have Twilight can escape Collapsar's singularity without any damage dealt to them.