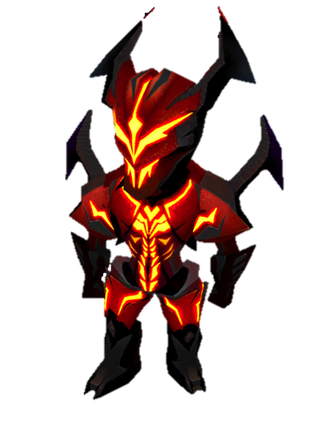 Strength: B
Defense: B
Health: A
Agility: A
Versatility: B

The Chaos Armor is considered a top-tier armor, and is best known for having a unique ability which emits a death aura that damages anyone near it, allowing kills without using the right joystick. The Chaos Armor was first shown on September 3rd, 2012, and was released to everyone two days later. Chaos Armor is known to resemble a devil because of its helmet.

Caution should be used while fighting against a Chaos player, as the damaging effects of the aura persist even after the death of the player. As a result, it is possible to kill a Chaos player in close-range combat, and then succumb to the dead player's aura which will continue to remain active until the ability expires.

It is mainly recommended for PvP; its ability isn't very effective against swarming aliens (especially charging Mambulls) from the Lair map onward. It also possesses some of the lowest amounts of base power among the end game armors, so it's not as well suited to PvE compared to some other armor. It is also not effective in PvE since you risk yourself from taking damage from swarms of aliens.

(Aura damages any opponent too close to you; lasts for 10 seconds, takes 45 seconds to recharge. Ability remains active even after death)