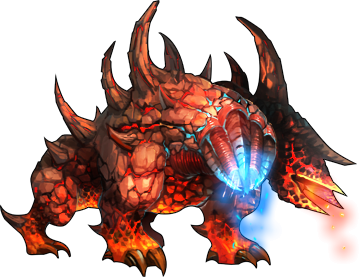 Cerberlisk is a boss that is found in the Volcano map on Stage 4. This boss has the ability to shoot out fireballs similar to the way Siegfried does but will leave behind fire which will damage you. The boss has two arms/heads. One shoots fire balls while the other is a vacuum, or a repeller if you are close to the lava edges.

Like most of the bosses in Star Warfare 2: Payback, Cerberlisk has very rapid moves and speed is needed to dodge every single one of them. If you have low armor and speed, you will get annihilated without even getting a chance to dodge.

Flaming Ball: This is Cerberlisk's initial move. Cerberlisk will throw a fire bomb that will explode and deal blast damage while leaving behind flames that will quickly mow down your health if you are not fast enough.

Triple Fireballs: Cerberlisk will rapidly fire out three waves of 7 fireballs each. The fireballs' texture blend in with each other, making it hard to tell which one is going to hit you. This move is similar to Siegfried's Meteor Shower but faster and deadlier.

Impact: Cerberlisk will quickly run towards you and ram into you, dealing damage.

Vacuum Lunge: Cerberlisk will try to suck you in, then lunge at you when he is done. You will need high speed to run away from the vacuum waves that suck you in.

Vacuum Blow: Cerberlisk will try to blow you away near the lava edges, dealing damage.

Spark Fireball: Cerberlisk will suck you in, before chaining into his Triple Fireballs move. This move usually occurs when the boss is nearly dead.

Triple Bulges: Cerberlisk will lunge at you three times. He will miss the first two if you are fast enough, but you will need high speed to dodge the third one.

Pyrospin: Cerberlisk will combine his Vacuum Blow with his Fire Blast and create a flame tornado that will follow you and will hit you if you are not fast enough.

Generally, if you have good mobility, you will take no damage when Cerberlisk uses his Vacuum Blow. This is a very good strategy to defeating Cerberlisk as his Vacuum Lunge/Vacuum Blast will instantly destroy a huge portion of your health. Also important to note is Cerberlisk's Napalm Bomb, one of his deadly moves. It deals a ton of damage and leaves behind a flame that will damage you.

Be cautious of Pyrospin. When Cerberlisk casts his Pyrospin DO NOT FIRE. Keep running and equip a weapon that is able to give you a speed bonus as when the flame tornado touches you, you will be continuously stunned and be dealt insane damage.

Cerberlisk is quite a hard boss because his movements are usually incredibly hard to predict, he has fast attacks, and he is generally considered a Tier 3 boss. Equipping a tank armor bonus is definitely not going to be the right set to beat this boss as this boss can deal massive damage to mid tier armor. Cerberlisk might require some mithril revives which is generally recommended for the boss.

Recommended Weapon: EGT-42 Uranus is recommended because it is the most damaging weapon and most efficient when you are stuck on Stage 4.

Recommended Bag: Gravity will make you immune to taking damage from the lava due to its hovering ability, but costs mithril to obtain. The MiT-Blue (obtainable only after Stage 4 has been beaten) is a must have backpack; recommended weapons for this backpack are the Bloodmoon for speed bonus and the Uranus for damage.

And do not forget to take potions. They will greatly support you against the deadly boss. Remember to take potions that can overheal you (take it as a restore to full HP.)

Recommended Weapon(s) (Heroic): The UNS-III ShadowArbit is a good mid-high energy assault rifle you can use when maxed. It deals good damage, especially if you pair it up with energy bonuses. Other guns you can use are the RABS-II Harbinger, FIW-II HolySpear, and the EGT-76 Obsidian. They deal high damage and take chunks off of Cerberlisk's health.

Recommended Bag(s) (Heroic): Brand's Gift is highly recommended due to its decent HP and speed, as well as having great damage and EXP bonuses. Of course, you can use any other bag you prefer, such as Illusion, Immortal, or Glory because they have really good bonuses as well. Merge is also recommended due to its decent speed and HP, as well as good damage, EXP bonuses and having the ability to generate a shield that is 20% of your total HP.