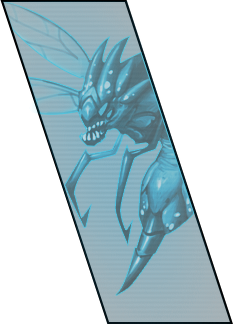 The Black Mayfly is the fourth alien introduced to the Star Warfare series. It is first encountered in Front Line with the Tacorlion at the same time. These airborne enemies have high speed, average attack power, and relatively low HP. Black Mayflies attack from long range with energized fireballs that deal a tiny bit of splash damage. However, these fiery missiles have rather low travel speed and can be dodged easily. They spawn regularly in most levels, and represent a more difficult challenge than Tacorlions due to their aerial position. Beware of these aliens when you're focusing on something else. They will not miss if you aren't moving, and be sure not to move back into the same spot where you were when they fired.

It is easiest to bring down these foes with a Light Sword, a Sniper Rifle, or a Machine Gun as it is sometimes difficult to aim at a moving target. However, all it takes is a good shot from a Sniper to kill a Black Mayfly. Utilizing a Light Sword may be effective in some circumstances, especially if one such alien is right above your head, for you can even use the Cutter to slice it from below. It is also helpful to note that Black Mayflies will remain entirely stationary until you move out of their range, giving you ample opportunity to attack.

In Star Warfare 2: Payback, Black Mayflys will instead fire bursts of black spikes at players instead of fireballs. Their other tactics do not change.