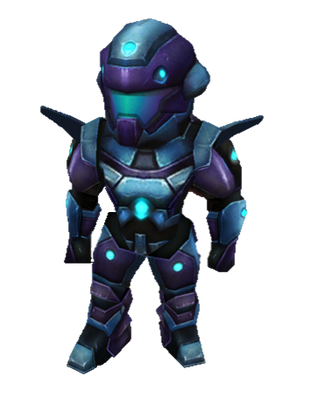 Strength: S
Defense: B
Health: B
Agility: A
Versatility: B

The Atom Armor is a mid-game armor available at Rank 6. The armor set is best known for the damage bonus it offers to beam-class weapons (namely, the Laser Guns, Sniper Rifles, Laser Cannon and Xmax-Tree).

In PvP, players who wish to trade away their defenses for more power to their beam weaponry may choose this armor instead of armors unlocked at higher ranks. It might be worthwhile to stay out of sight and ambush your opponents at mid or long range. It is also a good idea to use the X-Max Tree to confront your enemies at closer ranges, but due to its lower health level, distance is the key. If you suffer from lack of sniper aim, use the NOVA27 (which is just as good as the LIT07 in PvP) and practice at all ranges. Avoid close confrontation with opponents. This armor can be very useful if you have an R100-Railgun or an R700-AA and is very tough with the Reflection.

*Note 1: The Atom Armor's beam bonus multiplies any power bonuses offered by the armor pieces and the backpack. As a result, when a beam-class weapon is equipped, the armor alone offers an effective power bonus of 49.5%, while factoring in a backpack would require you to multiply the backpack's power bonus by 1.3

*Note 2: Due to a glitch in the v2.80 update, this armor, when combined with Reflection, gives the sniper rifle a huge power bonus, resulting in a total of 10,292 Power (assuming the player was wearing a 30% Power Bonus backpack), which is enough to take out any armor with a health below 60,001 in one shot.