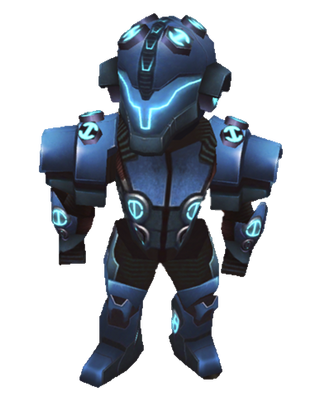 The Andromedae Armor is considered a top-tier armor. On top of possessing the third highest HP of all armors, it additionally possesses an ability that allows the user to gain +1 speed, regenerate 10,000 HP, and nullify 30% of damage taken for 15 seconds. In this respect, the Andromedae's defenses are considered to surpass that of the Knight Armor, despite the latter having an additional 3000 HP.

The Andromedae Armor is generally considered a defensive or heavy armor due to its high amount of HP and low mobility. While it's very much possible to use the Andromedae for PvE boss fights, players may have trouble avoiding attacks due to its speed penalty. It loses a huge portion of its value when used in PvP due to the speed penalty and vulnerability to Sniper Rifles, even worse if sustained a direct hit by enemy's R700-AA.

Similarly in PvP, the low mobility of the Andromedae will force players to develop a different combat style to the standard form of agile combat that is favored by most other armor sets. When used properly alongside suitable backpacks and weapons, however, skilled Andromedae users can be quite difficult to eliminate, and they can make for tough opponents. The best way to kill a player in this armor is to conduct hit and run attacks and use superior speed. An example is a Cygni firing the Black Stars, running away, and coming back again. Try to spot them at long range then circle around them. In close combat, try circling around as they will turn far slower than you. Use high-powered weapons such as the M-Z7B2, J.O.K.E, or Reflection.

*Note 1: Agility ranks over Titan and Tank armors due to temporary speed boost while the ability is active.

*While the in-game description states that the cooldown is 120 seconds, timing it actually shows that there is a period of 85 seconds between when the ability runs out and when you can next activate the ability.